What major currencies were the strongest and weakest this week?

The GBP was the strongest. The JPY was the weakest.

The trading week is coming to an end, and that means it is time to crown the strongest and weakest of the major currencies. 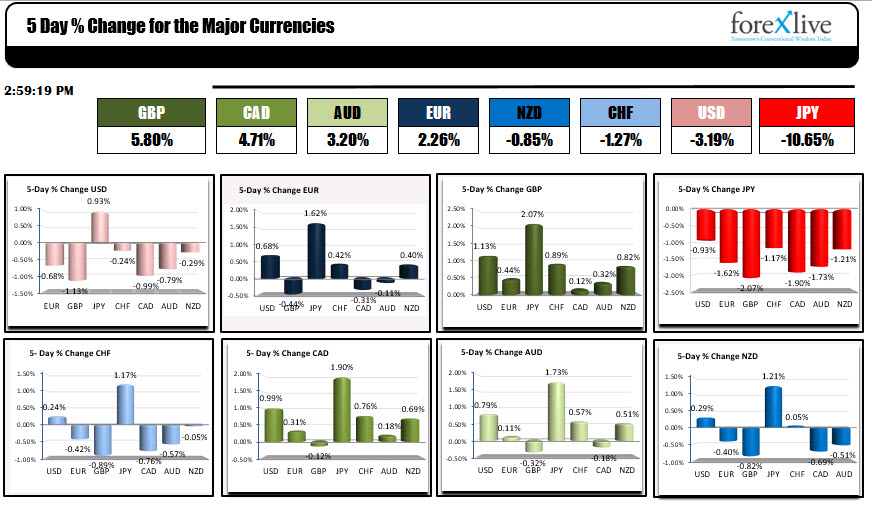 The ranking is determined by calculating the % changes of each currency vs each other and summing up changes.  The most positive number is the strongest. The most negative is the weakest.  There is no weighting.
The strongest currency this week was the GBP. The main catalyst was more positive chatter on a Brexit solution.
The weakest is the JPY. The US 10 year went to 3% which was supportive of the USDJPY. For pairs like the GBPJPY, AUDJPY, CADJPY, EURJPY, they were dragged higher by the GBP, AUD, CAD and EUR moving higher in general.  Stocks also advanced which tends to help the JPY pair move higher (lower JPY).
The biggest % gainer for the week was the GBPJPY which moved up 2.07% (in the snapshot).
Looking at the daily chart below, the pair bottomed on Monday at  143.06.
On Tuesday, the price tested the 100 day MA (blue line) and found sellers.
After a correction on Wednesday, the price raced higher on Thursday, largely influenced by more favorable Brexit hopes, and the break of the 100 day MA at 145.766 (blue line).  The price also moved above a topside trend line and 38.2% retracement at 146.272.
Today, the price stalled near that broken trend line and 38.2% retracement (the low reached 146.307).  Although the price is lower today, staying above those technical levels keeps the buyers more in control.
That trend line and retracement will be key for the bias next week.  Stay above is more bullish. Move below and the gains from the week, may give up more of the gains.

@pikines77
Previous Authors’ viral Twitter thread is now a horror film starring Alyson Hannigan
Next US crude oil settles the week at $68.99, up $0.40 on the day