The AUDJPY is the biggest mover today. It was on Friday too but in the opposite direction

What the difference a day makes. AUDJPY was the weakest currency pair on Friday. It is the strongest today.

On Friday as stocks fell, the AUDJPY also moved sharply lower.  The pair was the weakest of the major currency pairs.   The reason?  The “risk off” flows.  Stocks were down.  Pres. Trump was likely to announce new tariffs on China.  The G7 meeting was ahead.
I wrote a post on the pair on Friday HERE. 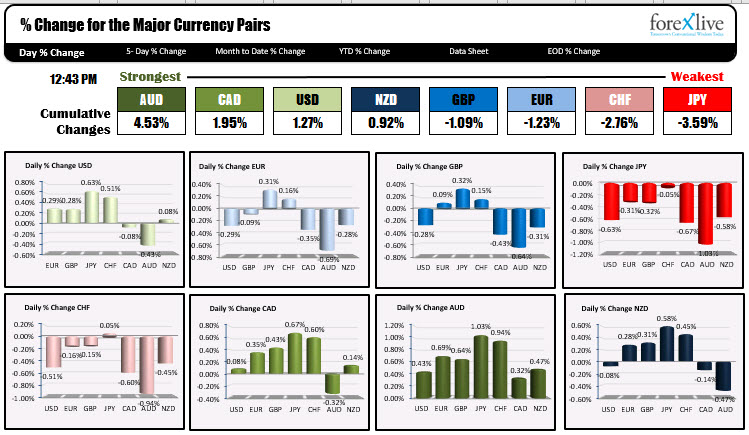 Today, there is glimmers of hope again with China (will be spoiled if China calls off the so called September meeting which has no scheduled date yet). As a result, stocks are higher and that has led to a reversal higher in the AUDJPY.  In fact, despite a run lower at the start of the day from the pessimistic weekend news at the time, the pair has snapped higher and is back near the highs from Friday. Moreover, the pair is the biggest mover today. It is the strongest rising by 1.03% on the day.
So the AUDJPY has nearly completed the lap lower and higher over the course of a little more than 24 hours of trading.   It also went from the weakest to the strongest currency pair (see ranking above). Risk off on Friday. Risk on today.
How can predict such reversals?  You can’t.
However, the price action and tools can help get you in and get you out.
On Friday, I wrote the price needed to get and stay below the 71.00 level to keep the bears more in control.  That was the next target level on the downside from swing lows on August 13.
Moving below that would target the 70.89 (low from August 12) and 70.738 (low from August 6 and low for the year).  A move below that level would take the pair to the lowest level since 2009. That is a significant break.
What happened?

The price opened at 70.71 just below the 70.73 level (see chart above). The price moved to 70.755 and sold off. The low reached 69.945 before rebounding.
Traders who sold the break at the open today, had a decent trade in the first few hours of trading. However, you have to be prepared in case things don’t go your way. Fundamentally, the story may change (which is what happened too).
Clearly, if the price breaks to new year lows (new lows since 2009), you would like to see that old low stay broken (at 70.738). If not, it’s a failed break. It’s also a failed break to a new 10 year low. That is a significant failure.
Fundamentally, if the price breaks because of new tariffs and Trump saying he wishes he would do more. If that story changes – or there is hope for a truce – the price can also reverse from a fundamental perspective.
So looking at the houely chart, the price rebounded off the lows back to the 70.738 area. After a brief dip, the buyers came in and took the price back above the 70.738 level.
The price shot up to 71.42, before coming back down to retest the 70.738 level (see red circle 3).  Buyers were ready and the price launched higher.
What now?
Going back to Friday, the fall lower all started against the 100 hour MA (blue line).  The price stalled against it, fell below the 200 hour MA (green line) and a lower trend line.  There was a correction above the broken trend line but the 200 hour MA was not rebroken. That was bearish.
Today, the same three tools are in play. The 100 hour MA (blue line) at 71.855 has been breached (blue line).
The 200 hour MA (green line) is at 71.909 and has been breached.
The third tool, the underside of the broken trend line is at 71.08. That has not been broken yet.
A move above and above the 71.10 high from Friday and topside trend line at 71.12, will be make the technical picture even more bullish with 72.394 (high from last week), the next target. Conversely, stay below keeps a lid on the pair near the levels that did the same thing on Friday.  Different day, but the same levels are in play.
So, there has been lots of volatility in the AUDJPY pair, but through it, there were some technical levels that gave clues as to the bias.
If trading these volatile pair, you have to keep an eye open for changes in sentiment.  Failure to do so, can be fatal to your forex trading health.